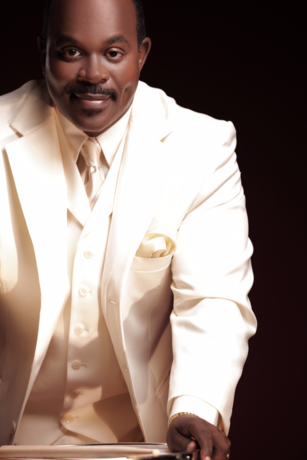 Drummer, vocalist and composer, Tony Addison, was born with rhythm and always thought the drums were “cool”. A native of Washington, D.C. the young Addison grew up around music with a father that played blues guitar, a mother who was an avid listener and a brother who still plays saxophone. Inspired by jazz luminaries, Max Roach and Art Blakey, Addison wanted to emulate the same rhythmic abilities and power on his own drum set. So Tony increased his knowledge and skills by studying music at Washington Music Conservatory, Lettum Play Summer Jazz Organization and the University of the District of Columbia. Eventually his love for jazz put him on the bandstand with great jazz artists such as Dizzy Gillespie, Stanley Turentine and Webster Young.

“Life hasn’t always been so good.  I used to be a boxer, artist and a dancer, but the problem was I didn’t have Jesus. I was on top of the world and then I started living in the fast lane: money, women and drugs. The streets got the best of me, but God was always there for me.  So the Lord took those things from me because I didn’t use them for His glory, only for myself.  But He spared my music so I could share my message with others in order to help them avoid some of my own pitfalls.”

Tony is clearly at home with a variety of styles of music which allowed him to write the compositions of praise and to follow his passion for the Lord by doing a gospel debut CD, He Is Love, instead of a jazz recording. “I always thought that my first CD would be jazz because of my love of that art form, but one night, while I was in my studio composing, I just stopped and I was hit by the Holy Spirit.  I started praising the Lord, counting my blessings for my beautiful and God loving wife, a new home, healthy, loving children and a good job. And although I realize that whatever music I am performing comes from the spirit, there is no greater feeling for me than when I’m playing praise and worship music.

He Is Love, “is a testimony to Tony’s love of the Lord through his music. The ten original songs on this dynamic recording combine the messages of faith with funky, Latin, rock and soulful grooves masterfully executed by a talented array of musicians. Every song maintains its unique identity through the spiritual statements conveyed by each vocalist, the arrangements and the instrumentation. The recording remains true to the essence of each song, allowing the music to breathe, develop and grow by trusting the guidance of the lyrics and at the same time respecting the spontaneity of each moment. According to Addison, “The title track fully describes, from my musical point of view, the power, mercy and faithfulness of Jesus Christ.”

That’s why all of the ten tracks on, He Is Love, distributed by That Other Label (TOL), are a true testament to Addison’s enduring faith in God. Each song is an expression of his life’s story and he passionately wants to share his journey with those who are struggling in their lives. The musicians on the CD are all top notch performers from the Washington, D.C. area and include, William Knowles (piano and horn arrangements), Russell Sledge (bass), Tony Cotherine (electric and acoustic guitars), Melvin Bryant Jr. (organ and strings), Matt Miller (percussion), Frankie Addison (tenor saxophone), Alvin Trask (trumpet), Ron Oshima (flute, tenor and alto saxophone), and vocalists Lori Williams, William Hubbard (vocal arrangements), Rosalind Roz White, Anthony Manough and of course Tony Addison (drums, vocals, rap, narration and composer).

Besides serving in the music ministry at his church, Tony performs various styles of music as part of his own trio or with other artists in the D.C. area in venues like the National Black Caucus Convention, Kennedy Center, Blues Alley, Studio Theater, HR57 and Metro Stage. He also provides music for weddings, private parties and local events as part of the Addison Brothers Jazz Quartet and/or the Tony Addison Trio. “I made a promise to God,” said Tony, “that my first CD will be for His glory. No matter how long it takes, I will not record any music in my studio until I finish.  It has been an amazing journey for me as I watched God moving in my life while preparing this recording. He has been faithful to me and I give Him all that I have because He is love.” Tony looks forward to performing the tracks from this CD in live performances and to continue to make music for the glory of God.